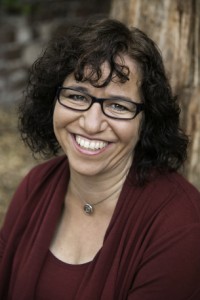 Laila Ibrahim grew up in Whittier, California on the eastern edge of Los Angeles County, and moved to Oakland, California to attend Mills College where she studied Psychology and Child Development. After getting a Master’s Degree in Human Development, she realized she wanted to do more hands on work with children, and opened up her own preschool: Woolsey Children’s School. Her education and experiences as an educator and parent provide ample for her writing – especially her study of Attachment Theory and multiculturalism.

She identifies as a devout Unitarian Universalist – which is sort of like being a radical moderate – and worked as the Director of Children and Family Ministries at the First Unitarian Church of Oakland for five years. She lives in a small co-housing community in Berkeley with her wife, Rinda, a public school administrator. She the proud mother of two wonderful young adult daughter and the not-so-proud mother of two rambunctious mini-Aussies.

Laila self-published Yellow Crocus in 2011 after agents repeatedly told her that no one would want to read a story about the love between an enslaved black woman and her privileged white charge. Over the years the readers have proven them wrong. She became a full-time writer in 2015.

Living Right, her next novel, is set in 2004, but with a similar theme: loving across difference. It goes beyond the headline to reveal the life and death stakes when a devoted mother struggles to reconcile her evangelical Christian beliefs with her son’s sexual orientation.

She loves calling or Skyping into bookclubs and public speaking. She can be contacted at [email protected]

JRK: Can you tell us a bit about your background, where you are from and all that other good stuff?

LI: I was born and raised in Whittier California in Los Angeles County. I went through the public school system there and graduated from Whittier High. I moved to Oakland California to study Child Development and Psychology at Mills College. I got A Master’s Degree in Human Development from San Francisco State. Attachment Theory is my main academic interest.

JRK: Your new book entitled, “Living Right” is about gay conversion therapy. Can you tell us a bit about the book and why you wrote it?

LI: It’s set in a San Francisco suburb in 2004. It focuses on a devoutly evangelical Christian mother who 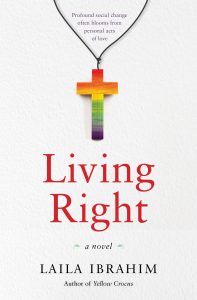 has a crisis of faith and identity when she learns that her son has same sex attractions after he attempts suicide.

I was inspired to write it after seeing protesters at a marriage equality rally. I was struck by the group of teens and realized that parents probably brought them to this place to stand up for their highest values, and because they wanted to save lives. Ironically, I was there standing up for my highest values and because I know the freedom that comes with living out and proud. I

know that suicide rates for gay teens is way too high. I was also there to save lives.

In that moment I wanted to hand them a piece of paper that said, “What if you are condemning your own brother, cousin, nephew, or child? We are all gifts from God. Gay teens are 4 times more likely to attempt suicide that their straight peers.”

JRK: We hear about gay conversion therapy but what exactly is it? What is the process that is undertaken to “deprogram” one’s sexual orientation back to straight?

LI: This is what the HRC says about it:

So-called “conversion therapy,” sometimes known as “reparative therapy,” is a range of dangerous and discredited practices that falsely claim to change a person’s sexual orientation or gender identity or expression. Such practices have been rejected by every mainstream medical and mental health organization for decades, but due to continuing discrimination and societal bias against LGBT people, some practitioners continue to conduct conversion therapy. Minors are especially vulnerable, and conversion therapy can lead to depression, anxiety, drug use, homelessness, and suicide.

The process can be one on one counseling, group therapy, or a retreat situation.

JRK: Gay conversion therapy can be an emotionally damaging experience not only for the person who is undergoing such therapy but for the parents as well. What are some of the emotions at play in both the gay teen and the parents?

LI: Before I learned more about conversion therapy I believed it was something that was done to teens and young adults by their parents. In my mind the teens were the victims of ignorant and bigoted parents. I hadn’t considered the emotional and spiritual damage that was being done to parents by their very own churches, the institution they rely on for moral leadership.

Since then I’ve learned:

-Many of the leaders of the conversion therapy movement were and are LGBT people pretending they had been cured because they were so desperate for that to be true.

-Some parents are/were being told by their ministers–trusted authorities in their lives–that it’s their fault their children have same sex attractions.

-Many of the teens go to conversion therapy voluntarily, desperately believing in and praying for a cure.

Like most things there’s a range of feeling depending on the situation. I had expected only to hear stories of anger towards parents. There certainly are many people who have just walked away from a relation with parents all together.

I hadn’t expected to talk to people who felt protective of their parents. But it makes sense, of course. Many of the people I’ve talked to about it have very complex and convoluted feelings about their adolescent coming out experiences. Their parents did very hurtful to things to them, when they were in a very vulnerable place, but they understand that their parents were doing it out of love. If they’ve worked through the issues and the parents have come to a place of acceptance, the parents feel very guilty. The LGBT person wants to both be honest about the pain, while being reassuring and connected to their parents now. It’s an emotionally complicated situation.

JRK: Gay Conversion Therapy is something that is advocated by religious institutions and other bible based groups. Many parents are told that it is their fault their child is gay. How do most parents react to this accusation and what premise is used by religious groups to cast the blame of one’s inherent sexuality onto another?

LI: The circular reasoning of conversion therapy is very insidious. One of the primary tenants is that if you believe, if you have full faith, God will take away these feelings. That’s what caused so many people to testify that they were ‘cured.’

JRK: One of the great travesties of gay conversion therapy is that the guilt and anguish caused by others and their condemnation of what is natural leads teens to commit suicide. In your experience what is the reaction of those who forced a gay teen to undergo such therapy in how they explain why the teen took such drastic action to escape what they felt was an unbearable situation festered by guilt?

LI: There’s a scene in my novel where Jenn explains that Josh, her son, is depressed because he has same-sex attractions. She is adamant that his depression will go away once he’s been transformed. Since transformation requires faith, so she can’t allow herself to doubt. In her mind, her son’s life depends on her faith. It’s not my theology, but she fully believes it in that moment. The challenge for me as a writer, was to take this character on an honest emotional and spiritual journey from that belief to a place where she could listen to God for herself and put love over ‘law.’

JRK: Some states have banned gay conversion therapy. Do you see these bans becoming a trend that will ultimately result in a nationwide ban of the practice?

LI: My understanding is that it’s banned for minors, but not adults. An adult can chose to see a conversion therapists and surprisingly many do. I think it is great that we are having a public conversation about it. I’ve had book clubs of straight people read Living Right and the members haven’t even heard of it. They think I exaggerated, but I actually showed a very mild situation with a quick, happy resolution.

JRK: How did your parents react to your coming out?

LI: My liberal parents had a less than stellar reaction to my coming out. They were divorced so their trajectories were separate. My Mom tried. Really she did, but she said some weird things to me. As I look back I realize she was worried I wouldn’t have a good life if I partnered with a woman. She knew gay people, but not that many. And none lived fully out lives at that time. But she came to my wedding and even did a PSA for PFLAG.

My Dad is from Egypt, so it was an even bigger leap for him. He was afraid I’d have to live in secrecy or face rejection by society. He couldn’t believe we wanted to have kids. His fear was reasonable at the time. I’ve lived a life my Dad couldn’t envision because it only existed in our imaginations in the 1980s. I’m happy to report that by the time he died he was an valuable part of our lives. My kids know that he didn’t come to our wedding, but it’s hard for them to that their dear Baba was accepting.

LI: I’m very grateful to get to be a full-time writer and tell stories that I think are missing from our world. Thank you for letting me share my story.