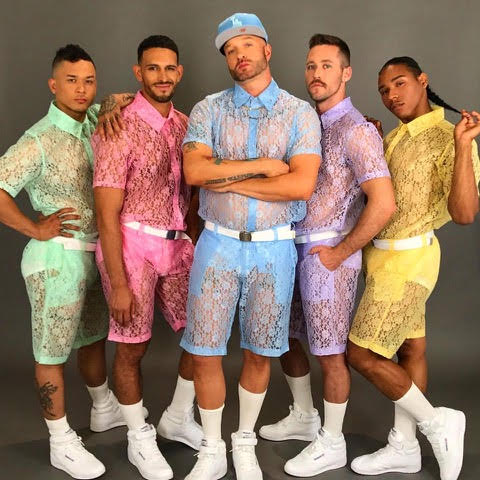 Cazwell took social media by storm recently with his lacey shorts for men. The outfits are part of his new video debuting off his recent music label “Snow Cone,” entitled, “Loose Wrists.” Cazwell was surprised by the reaction because he said, “the outfits are way more conservative than the shirtless guys in Speedo’s and jockstraps.”

Cazwell said that he noticed a real femme pride movement brewing on social media a few years ago, which gave him inspiration for the new release. He says, “It’s about time we all embrace femme. Whether we are gay or straight, when men get in touch with their feminine sides, it gives a real sense of empowerment.” Given the current political environment, he vowed to be as gay as possible with his music and videos. He stated that “We have to be more visible than ever and I hope I inspire that.”

Cazwell’s career started in downtown New York. He has been described as ‘what would have happened if Eminem had grown up on Madonna’s front lawn.’ He has over 10 million YouTube / VEVO views for such tentpole videos as ‘Ice Cream Truck,’ “I Seen Beyoncé Ay Burger King,’ ‘Get My Money Back,’ ‘No Selfie Control’ and “Rice & Beans’. He has amassed over 1 million digital streams and downloads and has earned hipster credibility with a steady flow of danceable hip hop tracks that impressively showcase his hypomanic take on pop culture.

JRK: Can you tell Diversity Rules Magazine readers a bit about your background in order to get acquainted with you?

C: Sure, my government name is Luke Cazwell but everyone calls me Cazwell except my mother. Originally from New England. I started my career in New York City and have been rapping and writing and producing music for over 10 years.

JRK: You just released a new single off your new music label, “Snow Cone,” entitled, “Loose Wrists.” Can you tell us about that and what kind of tune it is?

C: Loose Wrists is a gay pride anthem with a bit more of an old-school structure and style to it. It’s a bouncy hip-hop track that will change your life. Definitely a banger for when you’re driving to the beach this summer.

JRK: In the video for “Loose Wrists,” the men are regaled in pastel-colored lace outfits. Did you expect the social media reaction you received from the outfits?

C: No not at all. It was completely unexpected. I actually thought The lace outfits were way more conservative compared to what men are usually wearing in my videos. Peoples seem to have passionate opinions about whether or not men should be wearing lace shorts. I don’t really see what the big deal is. Guys have been letting their pants sag to their knees for years. Maybe this is the gay version of the pant sag look.  LOL

JRK: You have said the outfits were originally meant to be jogging suits. Can you tell us about that and how the transition occurred from that to what they have become?

C: We were originally going to make a Valore pastel jogging suits but then realized we couldn’t find ribbing in the same colors. I was really stressed out about it due to the time restraint, so I did what I always do and I took a nap. When I woke up the first thing that came to my mind was let’s just do a lace summer look.

JRK: The lacey shorts are not your first foray into the fashion world. You also debuted “Ice Cream Truck” underwear. Can you tell us about that phenomenon?

C: Ice Cream Truck underwear was a collaboration I did with Geoffrey Mac. We sold out really quick. Those underwear were super dope and stuck with the theme. The insides of the elastic even had a waffle cone print.

JRK: You have said you noticed a “femme movement” brewing on social media a few years ago. Can you tell us what you mean by that?

C: I was just saying that I’ve noticed on social media over the past few years that gay men don’t feel they have to be so ambiguous about their Femme side. Gay men seem less concerned with how they are classified by other gay men and it’s refreshing.

JRK: You have been quoted as saying, “At the end of last year, I vowed to be as gay as possible with my music and videos. We have to be more visible than ever and I hope I inspire that.” It is an admirable goal, and how do we get queer folks to embrace your philosophy more intimately?

C: I think what has pushed me is a sense of urgency due to the political climate. Everything coming out of the White House is hyper conservative. We need to fight to be visible or we could easily get our rights and our feelings of safety taken away from us.

JRK: What advice would you give to those experimenting with their “femme” side and to those who have not considered empowering that part of their essence?

C: Just do what you feel and don’t put too much thought into what people on the sidewalk are going to think about you when you put on that new flashy outfit.

JRK: Why do you think many men fear to express their femme side?

C: Because Femme has always been synonymous with being weak. But my hat is off to any man then leaves the house in heels. That takes real strength… not to mention coordination skills lol.

JRK: Do you have any parting thoughts you would like to leave Diversity Rules readers?

C: YES. Support your trans brothers and sisters to the fullest extent. We fought for the right to marry. We got it. Now our focus has to be about having the backs of the trans community. The gay movement would be nowhere if it wasn’t for trans women and we mustn’t forget that.