HGTV’s newest renovation stud, Francis Toumbakaris, is as comfortable in a pair of tights and slippers as he is in boots and overalls.  Trained in classical ballet since he was twelve, Toumbakaris has high kicked his way onto the national tours of Fosse and Dirty Rotten Scoundrels and on Broadway in the revival of Fiddler on the Roof starring Alfred Molina and later Harvey Fierstein and Rosie O’Donnell. Other theatrical career highlights include the award winning Susan Stroman dance musical Contact, and Candid at The New York City Opera.

“Drama is in my blood,” he says.  “I am Greek, after all.  Drama was born in my country.”   His animation shines in Brother Vs. Brother, HGTV’s latest competition show where renovators are split into two teams – Team Drew and Team Jonathan – to compete for a $50,000 cash prize.  “I’m out and loud,” he continues. “I’m not afraid to get dirty and I thrive on making decisions on the fly.

In 2000, on a tourist visa, he set out for New York City.  He had only $2000 in his pocket, money he had saved from being a backup dancer for a pop singer in Greece. But he was young, driven and ambitious.

He would land the occasional theatre and film job.  In addition to his stage work, Toumbakaris appeared on the big screen, with speaking parts in two major motion pictures: Joaquin Phoenix’s We own the Night and Tim Robbins’ Noise.  But he needed another job to see him through the lean months in-between show biz gigs.  After returning from touring with Scoundrels, he placed an ad on the internet looking for small painting projects, repair work and other odd jobs.  “I would ride around the city on my bicycle and a back-pack full of tools,” he laughs.

The big surprise was when his survival job began to take on a life of it’s own. One satisfied client referred another, which led to another and so on. Within a year, Toumbakaris went from completing simple jobs to doing full-scale renovations in Manhattan apartments.  He hired an assistant, filed for insurance and in 2007, his contracting and design company, Greek & Handy was established.

Toumbakaris believes his years as a dancer helped prepare him for design. The stage taught him to be 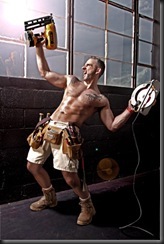 fearless, to perform under tremendous stress and to make the job work even when all appears to be going wrong.  It taught him to trust his gut instinct and most importantly, dance taught him about the art of space.

According to Toumbakaris, good design is not simply about pretty colors, fabrics and accessories.  It is an art that requires precise and intricate problem solving.  “I am constantly calculating new ways to improve my clients work and living environments.”

Toumbakaris describes his style as comfortable luxury with a classic urban feel.   “I like to think of myself as the orchestra conductor.  Although I may not play all the instruments, I direct all the moving pieces to create one beautiful harmony.”

His theatrical training even helped to land Brother Vs. Brother.  “I auditioned three times for the network, hoping to compete on season four of HGTV’s Design Star.” However, producers felt Toumbakaris’ background in home construction was better suited for Drew and Jonathan’s new show.

He’s excited that Brother Vs. Brother is giving him the opportunity to combine his love of show biz with his passion for renovation. “I never thought wearing a tool belt would give me the chance to perform on a new stage,” he says.  “But why not?  I’m an artist.  I’m always looking to create something new.”

His ambition extends beyond the show.  A Greek & Handy line of tools, paints and home goods is in the works. Toumbakaris also aims to find a husband and build a family.  Yes, the dancer-turned-handyman-turned-interior renovator admits he is anxious for his next big role, that of “Daddy.”