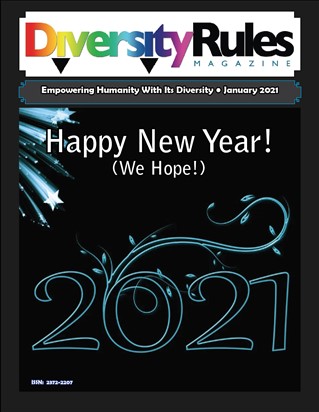 Jim Koury is a seeker of personal truth and desires to empower others to find their own personal truth, whatever it may be. He is also an activist who is not afraid to speak his mind and ruffle some feathers, if necessary. His main objective is to get people to think and think for themselves. He espouses Aristotle’s mantra, “It is the mark of an educated mind to entertain a thought without accepting it.” Jim does not force his views on others but just puts them out there for folks to think about and discard if they wish.

As we enter a New Year, I felt it was important to dedicate the main feature of the January issue to a personal reflection on the year that was … 2020. In all aspects, it was most certainly a very trying year. I would have to say THE most trying year of my life thus far.

As normally is the case, when the New Year 2020 dawned, we all had the usual hopes for the future, both personally, for the nation and the world, as well. As the year rolled on, it became very evident that 2020 was not to be a normal year in any respect of the word.

Combined with the horrific disaster movie called Trump, Covid 19 added another layer of despair and angst on top of the preceding three years of Trump’s reign of terror. The abysmal response of this man’s administration to the pandemic wrought much unnecessary anguish and death upon our nation that could have been avoided if there was a government in charge that knew what it was doing. Combined with the man’s incompetence, we had a Congress, most specifically the Senate, that enabled the man’s most foul attributes, and turned the other cheek and ignored the destruction Trump was barraging our nation with simply for power’s sake.

As we all know 2020 was a Presidential Election year, and it proved to be one of the worst campaigns this nation has ever experienced due to the vileness of this man’s soul bubbling to the surface impacting everything he did. Especially detrimental were his policies toward LGBTQ individuals, and other minorities, along with women. While he exuded a public façade that he was accepting of diversity and equality, the dark truth lurked ominously as verified by his actions that his words of support and solace were simply a ruse to pacify a gullible public. Luckily our nation did the right thing and rejected Trump’s madness and totalitarian tendencies and elected Joe Biden as the 46th President of the United States. We have much to look forward to now as January 20th draws nearer when Joe Biden is inaugurated.

We will have a President that respects the rule of law and the American institutions that are the driving force in America’s greatness. We will have a President that respects diversity and equality for all and will make that goal a major priority in his administration. Joe Biden will be a leader of the people and not simply those who gave him huge campaign donations, nor will he be beholden to those special interests that have so polluted the White House the past four years. Joe Biden, with Kamala Harris as his Vice President, will serve us well. I have complete faith in the abilities of these fine Americans to lead us out of the paradigm of despair, division, and chaos, and replace it once again with hope, and a belief in a future that is empowering for all American citizens.

Among all the negative that 2020 inflicted not only on our nation but the world, I also suffered a personal loss which we all must endure eventually … the loss of a parent. On October 22nd, my dear mother left her Earthly manifestation and became an angel across the veil.

The death of a parent was always something that happened to others. I did not think the ominous grasp of the reaper shrouded in black would not come knocking on our door. He always does, but I am forever grateful that he did not come to collect his due until she hit the ripe old age of 90. I am truly humbled that I have been honored to have the presence of both my folks for so long, as many my age are not so lucky. Alas, I now join the ranks of those who have experienced the excruciatingly sad loss of a parent, that rips a part of one’s heart out of the very chest within which it is housed. The emptiness is forever. Her smile, her voice, and the endless and unconditional support and love given to me by my mom will not be part of my daily physical realm any longer, but only existing within the memories of my mind, which I am sure I will call upon with great frequency.

I have to say that I have never really experienced such a degree of mental and emotional exhaustion that I have felt with the death of my mom. What will I remember most about 2020? It will not be Covid. It will not be Trump losing, or any other notable geopolitical or social event that happened. 2020 will always be solely remembered as the year I lost my mom … my best friend, my confidant, the focus of all I pretty much did last year and every year before that.

I will never forget you, mom. You will always have a place in my heart. I shall think of you every day. Your memory shall always burn brightly within my consciousness until death extinguishes the very glow in my eyes as it did to your loving, caring eyes on October 22nd. I bid adieu but you shall never be forgotten by me, your family, and those who had the honor and privilege of knowing you.

What will 2021 bring? Well, who the fuck knows, after the year we had! However, we can be sure of two things … Trump will be gone, as will COVID, with one departing much sooner than the other. January 20th will surely be a national day of celebration when the evil one departs and power is transferred to an adult once again. As for COVID, I am afraid that wretchedness will be with us for a bit longer, but the light at the end of the tunnel can be seen with 2 highly effective vaccines that will end this pandemic. Patience will be the keyword, but my patience, as well as that of millions of other Americans, has been greatly strained with our intense desire for life to return to what it once was before the pandemic.

Personally, 2021 will be a year of change, directly related to the death of my mom. Such an emotional event naturally changes one’s perspective and focus to a worldview dominated by the void created by the loss of someone we love very much. 2021 is also a 5 year, which in numerological terms, symbolizes a period of intense transition and great changes. Being in tune with such numerological, and other spiritual influences, I do not doubt that 2021 will bring changes in my situation on a grand scale never experienced before, which is a good thing.

We cannot fear change, as change is the force that propels us to greatness. It is how we deal with the change that will determine whether or not it is a propelling force or one that stymies and halts us in our tracks. It takes great courage and perseverance to overcome the fear of change and to allow it to mold us into the person we need to become … who we were meant to become.

Yes, this feature article had nothing to do really with queer issues or those related to profound changes in the way we perceive, acknowledge, and deal with persons different from us. I believe much of that will take care of itself with a new, more liberal Democratic Administration breathing new life into the American experiment after years of excoriatingly painful and discriminatory policies that have hurt millions of Americans.

My words of wisdom and advice for 2021 and to those reading this, is to work on yourselves to become the best you possible, in any way, shape, or form you have to do it. There is personal greatness within all of us. The thing is, no one can pry it out except the person we look at in the mirror every day. It takes guts, gumption, and courage to change one’s course in life. The forces of change will certainly do that, whether it be the loss of a parent or other loved one, a new job/loss of a job, or whatever other events that may seem to destabilize at the time it happens. Within the chaos, there is the seed of greatness. Yes, cliché but it is a grounding truth of life. Seek among the rubble for the seed that will foster the greatness you deserve no matter who or what you are. Do not let the seed get lost in the fear. Grab on to it, hold it tightly, and let it blossom when the time is right.