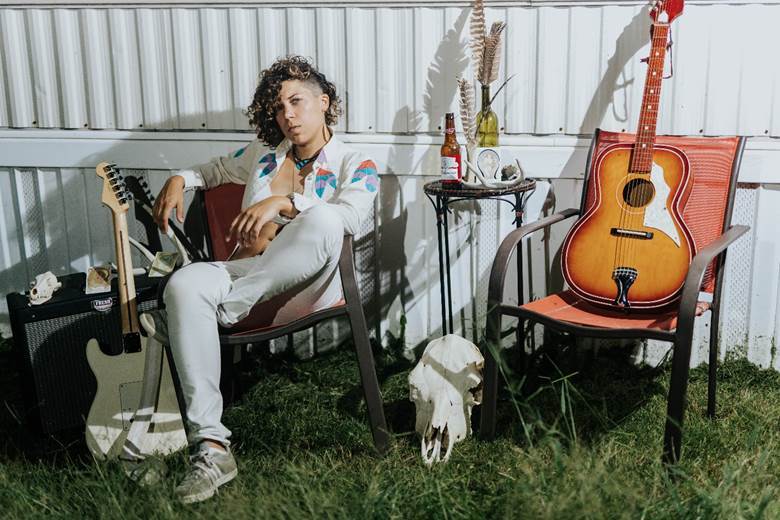 Also streaming is the official music video for “Happy,” a song Ford wrote about enjoying the moment now because “the now is all we have.”

The “Happy” music video inspired by Panic! at the Disco and the Pope. How do you make a music video during COVID? How about a cast that can’t get sick? Kristen Ford filmed “Happy” using her girlfriend’s house as a set, dolls from Goodwill (plus some Ken doll clothes, a haircut, and some custom painted blue eyes to make the dykey look complete) and took her inanimate objects on an adventure along with the lyrics of the song. The idea was inspired by Panic! at the Disco “Hey Look Ma, I made it” Brandon Urie puppet/body double and the Netflix “Homemade” TV Series “Voyage Au Bout De La Nuit” by Oscar-winning filmmaker Paolo Sorrentino, whose short was filmed in his Italian home and starring bobblehead dolls the Queen of England and the Pope.

Ford found inspiration for the album in Bruce Springsteen’s Nebraska. “No Plans is the idea that you can just relax a bit as all your plans dissolve and let life unfold,” mentions Ford. “It will be alright after all. Much of this record unfolded effortlessly, at the right place and the right time. I hope this music can be a light for you as well, at least until life can resume again as normal, with tours and hugs and people gathered at venues, festivals, and even some of my favorite dive bars.”

No Plans was written, recorded, engineered, and produced by an almost all-female roster of talent including Piper Payne, Ellen Angelico, and Briget Boyle.

Kristen Ford has an interesting connection to Jon Prine. No Plans, which was written and recorded in Nashville and produced by Grammy award winner Rachael Moore features the Americana tune “Jimmy.” That song was written on Kristen’s birthday, April 8th. In it is the line “Yesterday John Prine died,” who died on April 7, 2020, a victim of COVID-19. A few weeks later Kristen was chatting on the phone and making plans to record an EP with producer Gena Johnson (Brandi Carlile, Casey Musgraves), who had worked with Prine on many projects. Johnson was on board to produce and mix No Plans, but her work as Executive producer on a posthumous and star-studded tribute to John was an issue for the timing of No Plans. Thus, Johnson introduced Kristen to Rachael, and together they finished up the record. Who could have imagined one degree of separation between a rising indie act and a folk legend? John’s influence and inspiration are very much alive in today’s new Nashville sound. You can hear “Jimmy” now streaming everywhere.

“Crooked Youth” – This song was a bit challenging to record. It kept sounding too folky or DMB or 90s acoustic-driven, I tried to build a loop in reverse and it was in the wrong key, stuff like that kept happening. Rachael Moore (producer) knew what was in her head for it and we were going for more of a synth forward approach. Finally, we really found the flow with this tune and I am stoked about how it turned out. I am so inspired after all these years working on my craft, it’s my first song to be considered for a Grammy.

“Jimmy” – Jimmy is about when you care deeply for someone but worry you can’t accept them if they continue down a certain path. I met a very good boy right before the pandemic hit. It’s been six months, but Jimmy’s fate is still uncertain.

“Happy” – At one point I was taking lessons with teachers on guitar, voice, drums, and piano at the same time. As a musician, I sometimes feel frustrated with my capacity to learn and achieve fluidity on an instrument. Happy is about regardless of where you might want to go someday, enjoying the moment now, for the now is all we have.

“I Want You in My Corner” – Kayce and I played this through a couple of times. The studio felt very sealed up, dark, and intimate with just a guitar, piano, and a song. I think this one took 2 or 3. I feel pretty exposed on this one.

“Stick Shift Corolla” – This song I wrote in a church basement as a very soft confessional tune. I got chills recording this one, just me and Jon and Mat jamming our heads off. Once the guitars stack in a Jeff Buckley style vocal sort of poured out of me. This is my favorite song on No Plans EP. I feel like it embodies everything I love about being a songwriter, a singer, and a guitarist in a band.

Ford is a multi-instrumentalist based in Nashville, Tennessee who prior to COVID-19 performed over 100 shows per year to bring her music to her fans around the globe. Since 2008, Ford has toured relentlessly across America and Europe, her sound evolving from beatboxing solo acoustic to a one-woman looping band. She crafted pop hooks for electro-hop duo The Blu Janes and lead of indie rock outfit Kristen Ford & The Assembly.

Adaptability and an eagerness to connect were learned early on, her black father a frequent soloist at church, her white mother a 70’s folk devotee. Divorce, yearly moves, and changing schools often, Ford found solace performing. First as an actress, then picking up the guitar at age 14 writing her own songs as soon as she learned a few chords. She attended “Fame” style high school PVPA studying with Mitch Chakour (J. Geils Band, Joe Cocker) and onward to the IMA rock camp for girls working alongside And The Kids, Sonya Kitchell and Naia Kete. Upon seeing Ani Difranco perform, she felt an electric and profound clarity. Ford decided she would dedicate her life to making music.

Having lived in 6 states by the time she was 18, then roaring out of the closest in Chicago, Ford is unabashedly biracial, queer, a lover of city skylines and dinosaurs. 2014’s “Dinosaur” was recorded in Boston at Dimension Studios (Josh Ritter, Lake Street Dive, Ballroom Thieves). She toured her one-woman looping show for 2 years out of “LadyVan”, sleeping in Walmart parking lots, independently booking, promoting, and performing over 400 shows across 48 states and 3 continents. Layering guitar, bass, vocals, and drums at the same time.

In 2019 she crowdfunded over $20,000 for “War in the Living Room” a forthcoming record co-produced by June Millington (of Fanny) and Brett Bullion (Now, Now, Bad Bad Hats, Lizzo). She has performed at Pride festivals nationwide alongside Betty Who, Billy Gilman, Troye Sivan, and Melissa Ferrick. Inspired by a DIY ethos, an inability to commit to one instrument and crazy love for music, her time in Nashville has resulted in background roles on CMT’s “Nashville” many co-writes, playing country drums on lower Broadway, lead guitar at Exit/In, writer/publisher for SESAC, college representation with NACA and featured speaker at CDBaby DIY Conference. She has run several half marathons to raise money for girls rock camps, frequently travels to Spanish-speaking countries, and hopes to someday visit outer space, the true final frontier for this fearless, genre-bending babe.