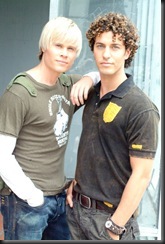 Diversity Rules Magazine is excited and honored to welcome Jason & deMarco in the October issue as its feature cover interview.

Pop singing duo and real-life partners, Jason & deMarco, are hitting the road once again this Fall, spreading their unique brand of inspiring music.  Their “Joy in the Journey: Celebrating Diversity” tour begins in Nashville on Friday, September 27th and continues for thirty days with over twenty East Coast performances.  The couple will travel on an RV tour bus along with Jason’s parents and the duo’s two-year old twin sons, Mason and Noah.  The tour hits upstate NY on Sunday, October 20th with a 10am show at Two Saints in Rochester. Then at 7pm, they perform St. Stephens-Bethlehem in Buffalo.

“We invite everyone to come together for a great concert celebrating our differences,” says Jason.

“Straight, gay, male, female, black or white, our diversity is what makes us a unique and powerful nation,” continues deMarco.  “Many of us want the same thing: someone to love, who will love us in return, and perhaps even build a family with that person.  We hope that our tour will inspire people and remind all that in spite of our differences, when we respect one another’s hopes and dreams, everyone wins.”

Jason & deMarco first recorded a Christmas album together in 2002 and launched a national Christmas tour. 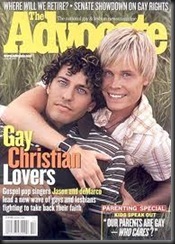 They had such an overwhelming response to their tour that they began recording more albums together and to-date have released six CD’s and several singles. Their music video for “This is Love” was named “Video of the Year” on LOGO in 2006.  Jason & deMarco’s most recent album release is SAFE.   They will perform many of the tracks from the album on their “Celebrating Diversity” tour. They will also perform new arrangements to well-known songs that they have yet to record.

The duo have performed throughout the world including Naples, Venice, Barcelona and Thailand.  In 2005, they were banned from Singapore for being an openly gay couple.  However, a year later, they were invited back to perform to Singapore to a sold-out event with over one thousand in attendance.  A government official actually attended and publicly apologized for the ban from the stage.

Jason and deMarco come to Diversity Rules Magazine, compliments of the fine folks at Project Publicity.

You do NOT want to miss this interview!  SUBSCRIBE TODAY!
www.diversityrulesmagazine.com/subscribe.html.