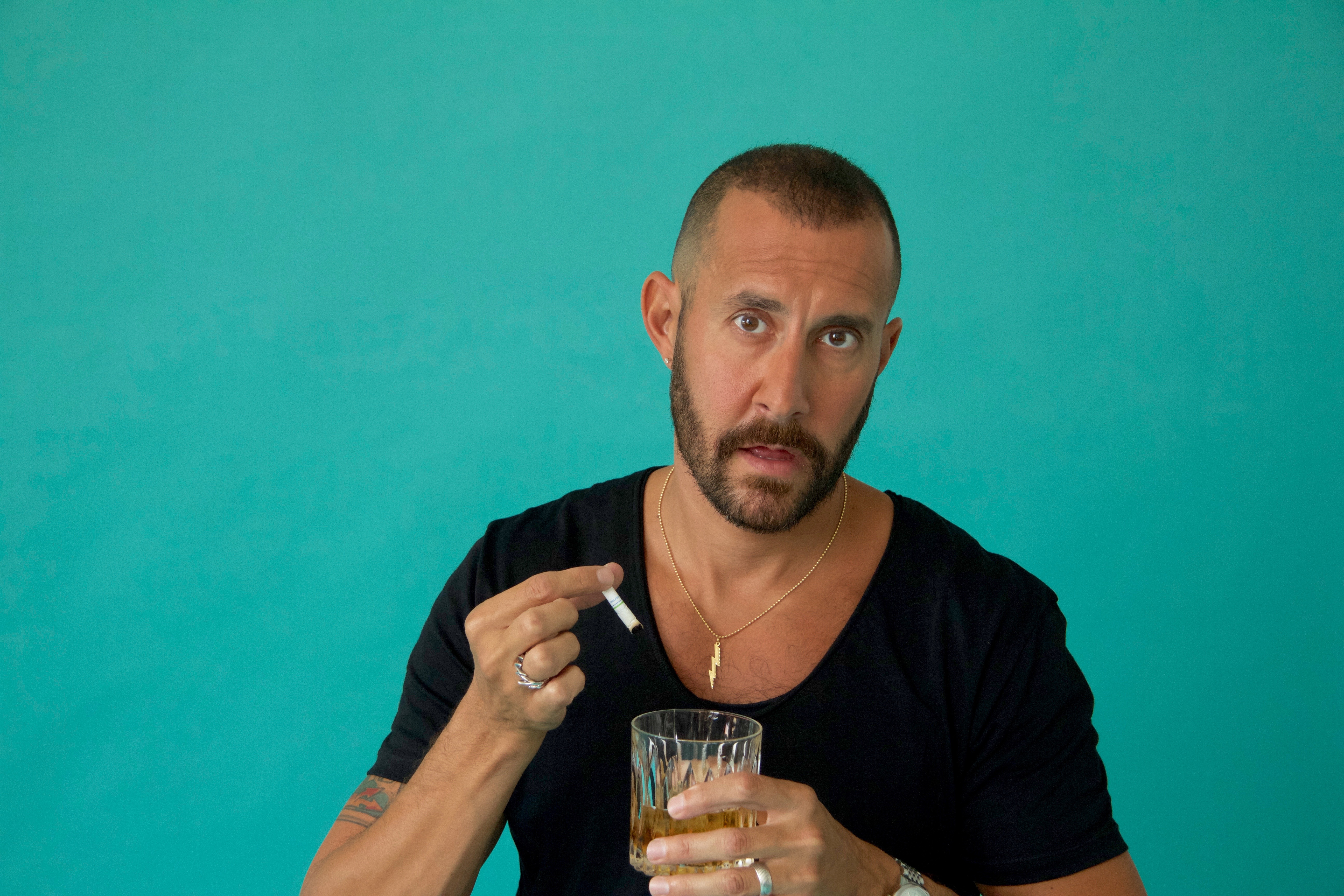 Diversity Rules Magazine welcomes Greg Scarnici as its October feature interview. Greg is a comedic artist and musician, whose music video and commercial parodies have been viewed over 10 million times on YouTube and a host of other sites. His work has also been featured on MTV, VH1, Fox News and CNN.

Greg just released his first memoir entitled, “I Hope My Mother Doesn’t See This.” It is “a snapshot of an artist coming to grips with his comedic artistry at a time when gay comedians were not as accepted as they are today.” “The book is an uncensored and uproariously funny peak at one of comedy’s biggest freaks.”

TV credits include appearances on “30 Rock,” “Online Nation,” “Nick Cannon: Short Circuitz,” “Straight Plan For The Gay Man,” and “Saturday Night Live,” where he currently works as an Associate Producer. Other TV writing credits include The Macy’s 4th of July Fireworks Spectacular on NBC and the 2014 NBA All-Star Pre-Game Concert in New Orleans.

Film credits include writing and directing the award-winning indie, “Glam-Trash,” the short films, “Dead End” and “Children Of The Dune,” as well as other shorts that have played at festivals around the country. He has also directed music videos for Kris Menace, The Kiki Twins, Jipsta, Mike Diamond, Pandora Boxx, Sherry Vine and others. Complete credit list available on IMDB.

Greg has also written and performed the shows, “Queens,” “The Buddy & Barbara Comedy Hour” (with Drag Sensation, Sherry Vine), “SEX TAPE” and “Must Be The Music” at Joe’s Pub, Ars Nova, The UCB Theater and on Fire Island.

Greg also produces music with Joe Thompson, under the name Undercover. Their debut album featured the song, “Your Lovin‘ Touch” which was selected to play at Abercrombie and Fitch songs throughout 2012. Check out streaming songs, mixes and music videos on Undercover’s website HERE. Or check out the music page above for DJ sets, gigs and more.

JRK: Can you give us an idea of who Greg Scarnici is — where you are from and all that good introductory stuff.

GS: Well I’m a comedic artist and musician and a native New Yorker who hails from Queens, New York. I call myself that cuz so many people hear “comedy” and think I do stand-up, which I’ve never done in my life. I’m more of a character actor/writer/performer/TV producer/DJ/house music producer and drag queen, which is soooooo less confusing, right?!?!?

JRK: You have many claims to fame but you are best known as a comedic artist and musician and can now add author to your list of credits with publication of your new book entitled, “I Hope My Mother Doesn’t Read This.” Can you tell us about the book and what prompted you to write it?

GS: It’s basically a collection of humorous essays about growing up gay in NYC and working in entertainment. I started working it as an exercise in writing, and before I knew it, I realized I had a book on my hands!

JRK: Your new book leaves no emotional stone unturned and provides a very candid look at your evolution into “one of the funniest people in NYC – as well as one of its biggest freaks” as legendary columnist Michael Musto has called you. To some being called a “freak” is a badge of honor. What was your reaction to this description of yourself?

GS: I’m totally fine being called a freak because I think we need to embrace our freakiness in this world. Let’s face it – diversity is all about being different – so freaky is a compliment if you ask me! As far as being called one of the funniest people in NYC – that is absolutely absurd. Amy Schumer, Tina Fey, Rachel Dratch, Louis CK and a thousand other hilarious people live here – so maybe I’m like #4,367 on that list.

JRK: I know it’s probably hard to pinpoint any one instance of debauchery as your most memorable, but how about a list of your top 5 from the book?

GS: It’s so funny – a lot of people are calling this book debaucherous, but I just think I’m being honest about things a lot of gay men have done! Or maybe I’m just jaded? Either way, here is a top 5 list of my favorite depraved stories referenced in the book:

1. Getting blown by straight, married guys in a park. (Who hasn’t?)
2. Accidentally doing crystal meth. (It happens!)
3. Doing cocaine in an after hours club at 6AM. (We’ve all been there!)
4. Going to a sex club to check it out. (Really! I just wanted to see what it was like!)
5. Eating hash brownies in Amsterdam. (I mean come on, this is expected when you visit there!)

JRK: You came to grips with your comedic artistry at a time when gay comedians were not accepted as they are today. What are some of the challenges you had to deal with, if any, along the way given this not so accepting environment?

GS: I guess the main challenge was trying to land an agent – which never happened. My forte was writing gay comedy, and since that wasn’t represented in TV and film in the 90s and 00s, no agents had any interest in taking me on as a client.

JRK: You are currently an Associate Producer of Saturday Night Live. The show has been able to evolve over the years and remain fresh and funny. Why do you think the show has had such longevity and been able to remain relevant with its enduring comedic presence?

GS: One of the reasons the show remains relevant is because Lorne Michaels made the great decision years ago to have a revolving host and musical act each week, which makes every show different, new and exciting. Also, it’s the only live sketch comedy show on the air, which allows us to produce the most timely comedy – sometimes written on the air when a news story breaks.

JRK: Since you began your tenure at Saturday Night Live, which cast stands out as one of your most memorable?

GS: I’ll always be fond of the cast I started with in ’95-’96, which starred Will Ferrell, Cheri Oteri, Molly Shannon and Jim Breuer. A lot of magic happened that year and, as we all know, in the following years, with the addition of Tracy Morgan, Ana Gasteyer and Chris Kattan.

JRK: In addition to your comedic finesse you are also an acclaimed musician with your band “Undercover.” Can you tell us about that adventure?

GS: I’ve been friends with singer/songwriter, Joe Thompson for over 15 years now, and our mutual love of house music inspired us to start making music together 5 years ago. Our latest album, “Night Beats” is a collection of music inspired by the NYC house I spin when I DJ, and takes the listener on a journey through a night out on the town…if you listen to it in full, which no one does nowadays! It’s all about singles. The children have no idea what an album is, probably!

JRK: You seem to never have a dull moment. What other projects are you working on currently?

GS: I’m currently writing Season 3 of my web series, “Bitch, Please” and finishing off my drag alter ego, Levonia Jenkins’ next house track, “Like Whore.” Both should be out this winter.

JRK: Any final thoughts you want to leave with Diversity Rules readers?

GS: Well since this magazine is called Diversity Rules, I would be remiss if I did not mention my love of diversity and how much it plays into the fabric of this city I call my home, NYC. In the immortal words of Prince, “White, Black, Puerto Rican – everybody’s just a-freakin’! So happy to have had this chat with a magazine that celebrates it.

Thanks for your time! XOXO