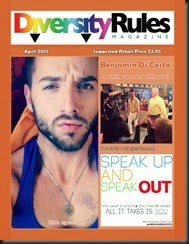 The April issue of Diversity Rules Magazine has been released featuring Benjamin Di’Costa, an advocate for youth and young adults.  In addition to Benjamin’s interview, the following is a partial listing of what’s coming up as well in February:

Editor’s Special Message: The editor addresses a timely topic with his essay entitled, “The Fallacy of Religious Liberty.”

As you can see from the sampling above, the April issue is packed full of great information but you won’t be able to read it unless you subscribe, as Diversity Rules is now a subscription only publication. Don’t miss a single issue! Subscribe now at:

Single issues (through the August 2014 issue) are also available as well as an annual digital subscriptions for $2.95 and $4.95, respectively.

The April issue is brought to you by these fine sponsors! Please let them know you found out about them from Diversity Rules Magazine: