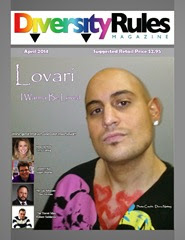 The April issue of Diversity Rules Magazine has been released featuring Lovari.  In addition to Lovari’s interview, the following is a partial listing of what’s coming up as well in March:

Keep Up Now: Terry Ludwig talks about the rejuvenation of spring.

Old Lesbians for Change: Find out about the upcoming gathering in Oakland, CA in July and what the group is all about.

The Gay Advocate:  A new column by Attorney-At-Law Dov Treiman.  His columns explains why marriage equality is an open and shut case.

Remedies:  Donny Winter returns with his thoughts on moving past homophobia.

As you can see from the sampling above, the April issue is packed full of great information but you won’t be able to read it unless you subscribe, as Diversity Rules is now a subscription only publication. Don’t miss a single issue!  Subscribe now at:

The April issue is brought to you by these fine sponsors!  Please let them know you found out about them from Diversity Rules Magazine: