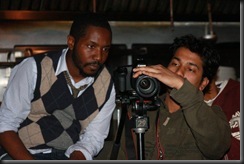 Nerva Augustin was born and raised in Queens New York. He is one of four children born from Haitian immigrant parents. Nerva holds a Bachelors Degree in English Literature and has a Masters in Fine Arts with a focus in Directing for film. Nerva’s work has been praised by his classmates and professors. He prides himself as being a Director who is and will always be a student of the craft. He has written and directed over five films two of them are expected to hit the festival circuit. He strives to be a director that can visually and mentally stimulate his audience.

Nerva Augustin is a film director working on an amazing film entitled, “Anointed,” that deals with blacks, gays and religion. It is about an impressionable young black male who lashes out against his gay father by joining an anti-gay hate group headed by a fiery preacher. This group is plotting the assassination of an ousted prominent homosexual politician who is seeking a political comeback.

Nerva is currently seeking investors for his film.  If you are interested or may know someone that may be interested, or if you just want more information, please contact Nerva Augustin at [email protected]  The following link is a pitch for the film.  Check it out at:  vimeo.com/47407076

Synopsis of “Anointed:”  Keith Williams has recently lost his mother through suicide. He blames the suicide on his father’s recently admission of being gay. Keith’s hatred for his father leads him to join a dangerous anti gay hate group which is headed by Rev Isaiah Righteousness. Isaiah is a former civil rights leader who marched with Dr King in the 60’s. He is known for his good work in the black community. Of late he is known for being fierce opponent of same sex relations. He is secretly in charge of an anti- gay terrorist group that is plotting the assassination of Peter Manuel. Peter is the former republican senator who was once believed to be a prime presidential candidate until he was caught in a scandal that reveled his sexually orientation. Peter has been in hiding for the past few years but is now ready to make a comeback. All these men find themselves on the verge of a diabolical conflict that will change their lives forever.