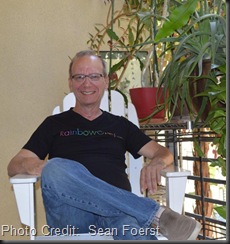 Stephen Dolainski is the founder of RainbowGray.com, which celebrates and fosters the unique experiences, wisdom, creativity and diversity of the LGBT population 50 and older. He has more than 25 years’ experience as a writer, editor and educator. He is the author of Grammar Traps: A Handbook of the 25 Most Common Grammar Mistakes and How to Avoid Them, which is used in schools and libraries nationwide, and Romantic Days and Nights in Los Angeles, a collection of romantically-themed itineraries in and around Los Angeles, and is the co-author of Words to Learn By: Academic Vocabulary, a three-book series designed for struggling readers. He has contributed to numerous travel guidebooks, magazines, specialty publications and websites covering travel, lifestyle, business, education and entertainment.

Before turning his attention to RainbowGray, he was the Adult Literacy Adviser for Los Angeles Unified School District. His background also includes an 11-year stint on the editorial staff of the hotel visitor guide Guest Informant and a brief Hollywood career as a puppeteer and a television production assistant.  Originally from New Jersey, he graduated from the University of Maryland with a BA in speech communication. He lives in Studio City, Calif., with his “little girl,” Sasha, a 4-year-old mixed-breed terrier.

JRK:  Can you give Diversity Rules readers an idea of who Stephen Dolainski is and a bit about your background?

SD:  I’m a 66-year-old gay man living in Los Angeles, and I’m single. As for my background, I’ve had a few careers. I came to LA more than 40 years ago to get into show business and worked for many years as a puppeteer doing live performances in nightclubs and on stage as well as in television. Then I went into publishing as a writer and editor. After that came adult education where I worked for more than 20 years, much of that time as the adult literacy adviser for LA Unified School District. I think my work with adult learners was the most stimulating and rewarding professional experience I had in all those years.

JRK:  You started RainbowGray.com as a resource for LGBT individuals 50 years of age and older.  What was the impetus that drove you to start the site?

SD:  Two years ago, I retired from LA Unified and finally had the time to devote to getting Rainbow Gray off the ground. I’d had this idea for a few years when my mother became ill and needed to move into an assisted living facility. I thought about my own future as an older gay man and wondered what might happen to me if I ever found myself in Mom’s situation. I started looking around but didn’t find very much out there that was relevant to me or the older LGBT population. My original idea was to create a resource for older LGBT folks who were looking for information about housing and caring for aging parents. But frankly, I kind of lost interest in that idea. Partly because there’s more stuff out there now that does pertain to older LGBT people, especially those people who, like many elderly people in this country, are in need of social services. I didn’t fit into that group either, and wanted to create something that spoke to aging LGBT boomers particularly, people in their fifties and sixties. So what came to me instead was the idea that we were marginalized in our society, and that our contributions, creativity and experiences weren’t very much appreciated within the gay world as well as the so-called straight world. So my idea morphed into creating a site that would celebrate and foster the wisdom, creativity, diversity and experiences of older gay people who were 50 or older.

JRK:  What can folks find when they go to the site? What’s it’s all about?

SD:  If you go to RainbowGray.com, and I hope people will, you’ll find a good mix of features that range from interviews with politicians, filmmakers, and activists, to profiles of writers, excerpts of their work, personal blogs, news items, LGBT history and more. I’m interested in hearing “voices,” not reporting news which is done quite well by other sites. We launched the site in June 2013, and my first interview was with the Rev. Troy Perry, who was one of the co-founders of the LA Gay Pride Parade. I’ve talked with Mel  Weymore, who was the first open transgender candidate for public office in New York State, and the actor Michael Kearns. Recently, I talked with Melanie Nathan, a native South African living in the States, who is setting up a rescue fund to help LGBT Africans escape the persecution against gays in their native country. Our tag line for Rainbow Gray is “there’s a new color in the rainbow flag—a vibrant shade of gray.” I want the site to reflect that vibrancy—we may be gay and we may be aging but we’re still a force to be reckoned with!

JRK:  What do you see as the most pressing issues facing elderly LGBT folks?  How can we as a society better address those needs?

SD:  I can only speak from my own experience since I’m not an expert in this area but I would have to say that we’re facing many of the same issues as other aging Americans—with some important differences. Older LGBT people tend to be less affluent, especially gay women and transgender people. I don’t have any children and I wonder who’s going to take care of me if I need help in the coming years. I’ve heard stories of people feeling isolated and lonely because partners have died and there’s no family nearby. So I think more needs to be done to outreach to older LGBT people—and there are many examples of fine work being done like here in LA at the LA Gay Center, which has a tremendous outreach and support program for older LGBT people. The advocacy organization SAGE in New York has created a training program to help caregivers in nursing homes and assisted living facilities better understand the unique needs of gay elders. That program was partly funded by the US government—and I can’t think of a better way to put some of our tax dollars to work. My hope is that the younger generation, which seems to view homosexuality in a completely different light, will step up to the plate in the years to come and acknowledge that we as a country need to do more for our elders, whether they’re gay or non-gay. It’s the right and moral thing to do.

JRK:  LGBT elders and the elderly population generally, tend to be many times an invisible group of people.  Why do you think this is?

SD:  I’ve already alluded to that in an earlier question, but I think you’re right—we do tend to be invisible. Why, I’m not sure. Maybe it has something to do with the fact that we’re just not the right demographic profile or that we’re not young anymore. When I go to West Hollywood and see all those beautiful, toned young men, and women, it’s no wonder I feel invisible. I think for many of us who have the financial wherewithal, we just go on about our lives and don’t pay too much attention to what’s going on. Those of us who are less affluent or even poor are, like other poor people in this country, completely marginalized. Maybe we just need to make more noise, speak up for ourselves and demand the world pay attention! People like the actor Michael Kearns have been doing that for years.

JRK:  The gay community is so enamored with the body perfect mentality and places a lot of focus on how others look.  The elderly LGBT sector most times does not meet these superficial standards and are lost in the attention the media places on the gay community.   How can that be changed?

SD:  I’m not sure it can be changed. What can change, however, is our own view of who we are and what standards we judge ourselves and others by. I can’t compete with a 20-year’s skin tone and energy. I wouldn’t even try. Yes, I hate that the skin on my arms is looking a bit wrinkly these days or that I have age spots on my hands.  But that’s part of the aging process. What I do have is experience and wisdom and that’s what I can share, and that can be very attractive even to younger people. I have a younger friend in his forties who told me once, “I just want to hang with you and learn from you.”

So I do have something to offer, even if it’s not a tight butt anymore!

JRK:  Do you perceive a bias in federal, state and other programs to heterosexual elders vs. LGBT elders?  Do LGBT folks avail themselves of these programs as freely as heterosexual persons?  Do LGBT elders tend to migrate back to the closet in their older years because of any perceived bias?

SD:  I really can’t answer the first question because I don’t have the experience and knowledge to respond accurately. As for whether LGBT elders tend to go back to closet, I have heard and read many accounts of this happening. And what a shame! Older LGBT people have some much to share about their struggles and experiences, and we all can gain something by listening to them and honoring their experiences.  Can’t we all appreciate the pain of losing a partner, someone we loved, or of enduring discrimination and alienation? That’s why I think, for example, the caregiver training that SAGE offers is so very important and can have such a positive impact on the lives of older LGBT folks.

JRK:  What kind of support groups are there for 50+ LGBT persons?  I know SAGE is a great resource but many communities do not have a SAGE chapter.

There are a number of groups that I know of but I am sure there are others.

JRK:  Do you have any closing thoughts you’d like to leave Diversity Rules readers?

SD:  “Old age is no place for sissies,” Bette Davis reportedly said. Aging isn’t easy for anybody gay or straight. But as my dear departed friend Jay told me once, “The alternative isn’t pretty!” I look at it this way: I have two choices—shrivel up and die or go down fighting for the most worthwhile life I can create for myself in the time I have left on the planet. I have a lot to be thankful for. I’m healthy and strong, I have an amazing family of friends, and I enjoy my life. As older LGBT people, we have a singular perspective on life that only comes with age and wisdom. Let’s share that with the world. That’s what I want to do with RainbowGray.com.