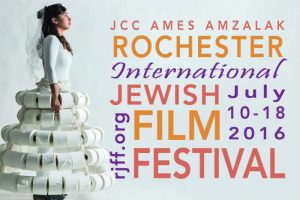 Welcome to the 16th year! The film committee has created a fantastic lineup of 26 international films to enlighten all ages. The Jewish Community Center (JCC) of Greater Rochester proudly presents comedies, political action, thrillers, biographies, history, romance, family, and coming of age stories. JCC is bringing 3 filmmakers for post-film discussions, and the festival opens with a rockin’ start on July 10 with the film Rock in the Red Zone. Join special guest, musician Avi Vaknin, who performs live. You won’t want to miss the first 3 episodes of the new Israeli hit TV series Fauda, with continued screenings in the fall for the new Sunday Film Series. Closing night, JCC celebrates Israel with the film In Search of Israeli Cuisine followed by the closing night party and Israeli food tasting.

Want to see them all?

The All Festival Passes allow access to every film (including the opening and closing night parties!) as well as early entry to the theater for the best seat selection.

The First Niagara JCC Matinee Pass is also available for all 7 matinee films being shown at the JCC Hart Theater.

Individual tickets are on sale now, and the film schedule is available online at: