Based on Press Release by Renna Communications 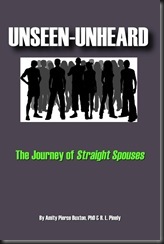 Voices you’ve never heard before.  Straight spouses whose husbands and wives turn out to be gay, lesbian, bisexual, or transgender are unseen and unheard, even though at least two million of them can be found across every stratum of our society.  How come they’re invisible? One reason is that attention focuses on the person who unexpectedly comes out or is discovered, according to researcher Amity P. Buxton, PhD, Founder of the Straight Spouse Network.  “Another reason,” she adds, “is that the coming out tends to be kept private to avoid negative reactions at work, in the community, in church or temple, or at schools and neighborhoods.  Everyone’s in the closet.”

“Why does it matter that straight spouses are unseen and unheard?” people often ask. “They’re straight, after all, not the target of societal negativity.”  Actually, based on years of research and observation, being straight becomes the issue as the straight spouses’ assumptions about marriage, gender, sexuality, sexual orientation, and their own identity are shattered. Their unique issues are ignored by outsiders and their traumas untended. Their plight minimized or not understood, straight spouses suffer physically, emotionally, sexually, and cognitively in isolation.  Since most are parents, their children are affected.  Meanwhile, their husbands and wives, liberated from their internal struggle, usually find relative peace and integrity, and outside support.

To open the window on the straight spouse’s journey from trauma to transformation, Dr. Buxton and a younger colleague, also a straight spouse, R.L. Pinely, gathered stories and emails written by a diverse group of over 40 women and men from across the US and abroad from 2005-2012 and produced Unseen-Unheard: the Journey of Straight Spouses.  The personal accounts range from “First Cries” through “Forging through the Fire,” “Soul Survivor,” and “Tug of War,“ to “Now.”

“We wrote for four audiences,” explains R. L. Pinely, “straight spouses themselves, so they’d learn they’re not alone; other people facing traumatic crises, so they’d see how these courageous men and women coped and conquered; professionals, so they’d have information to better help straight spouses; and finally, the community at large, so they’d grasp the extent of the unintended collateral damage done by society’s ‘one man-one woman’ prescription for marriage.”

The stories are painful, funny, terrifying, sad, informative, and inspiring.  “.. “Human interest, adventure, reflection,” Dr. Buxton adds. ”They reflect the diversity of the people and the experiences of straight spouses. Our hope is that they shine a light on a part of the community often forgotten and ignored.

“When I was first approached about a different book idea, I soon realized that their stories would have a greater impact on society as a whole,” says Alan Bourgeois, CEO of Creative House Press, the book’s publisher.  “My company is about helping people grow, and what better way to do that then to publish a book that teaches people about the damage our society continues to inflect upon others.  This book, because of the stories in it, is a valuable tool to learn from.”

Unseen-Unheard is published by Creative House Press.  It is available on their web site at:  www.CreativeHousePress.com or at any bookstore.

For more information about the Straight Spouse Network:  www.straightspouse.org.