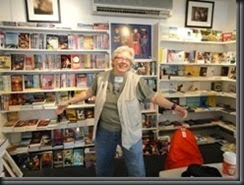 During the wonders of the holiday season, starting at Thanksgiving, we have much to be thankful for and to celebrate. Somehow the holiday lights and candles seem to glow brighter and spread more light with the knowledge that a majority of Americans are expressing increased tolerance toward our people. The dreadful Defense of Marriage Act and California’s equally ridiculous Proposition 8 have been laid to rest at last.  I’d love to send holiday good wishes to the courageous Edie Windsor and more to the righteously defiant California couples Paul Katami and Jeffrey Zarrill, Kris Perry and Sandy Stier.

The frosting on the wedding cake was the legalization of marriage in Rhode Island, Delaware, Minnesota, New Jersey, Hawaii and Illinois. Betrothed couples in Illinois have to wait until, when else, June, for the law to take effect.

Of course, the Employment Non-Discrimination Act has a way to go, but there are fewer Scrooges among the Republicans than there used to be. And there always has to be a Grinch:  Michael Steel, Boehner’s spokesperson, quoted the head buffoon, who “believes this legislation will increase frivolous litigation and cost American jobs, especially small business jobs.”

The undeclared states and politicians are a noodle pudding of marriage confusion: they will here, they won’t there; it’s already legal, they won’t take pictures at gay marriages, they won’t make gay wedding cakes, they will make gay birthday cakes…  Federally, President Obama appoints gay ambassadors and judges, and the Republicans protect the nation from gay ambassadors and judges. Gay cadets marry at West Point when just last year they could be dismissed for wanting to. The trend is worldwide; at least 15 countries no longer prohibit LGBT marriages.

We were discussing the legitimization of gay marriage and my sweetheart came up this little questionnaire for our non-gay, married neighbors to make sure all these changes aren’t hitting them too hard.

“Hey, how you doing there?”

“Well,” my sweetheart asks, “We just wondered – is our happiness bothering you?”

Neighbor looks puzzled. I am trying not to laugh.

My sweetheart says, “We were concerned you were maybe thinking of checking out the other team?”

“We thought our playfulness on walks around the neighborhood might be making you reevaluate whether watching T.V. on your couch is really enough for you –?

“Or if seeing Lee take out the trash or pick up the dog poop might inspire you to help your wife with chores?”

Neighbor’s wife peers out around hubby.

“We meet your wife at the neighborhood ladies’ luncheon. It’s so much fun,” my sweetheart would say, “that we both can go! Because, you know, we’re the only couple there. Ever.” I can see her swallow a little snicker.

“Does it bother you to hear us laugh in uproarious delight for extended periods of time?”

“Don’t you sometimes wish your bedroom shades were pulled down at all sorts of odd and unexpected times too?”

“It’s really hard,” my sweetheart tells them, “to keep our happiness under wraps. So, just let us know any time our gay marriage threatens to derail your 50 years together.”

Meanwhile, in the rush for holiday gifts, dinners, travel and parties, we can buy from a lot more vendors. The Human Rights Campaign’s Corporate Equality Index saw the largest growth in the survey’s history, adding 54 new businesses. The Victory Fund reported big wins for LGBT candidates. Even the Salvation Army timidly went with the flow – it removed links to two notorious “ex-gay” ministries as part of its new campaign against LGBT discrimination. Sports and acting celebrities seem to have popped out of their closets with greater frequency this past year. And personally, my sweetheart and I were able to leave an uber conservative area and move to a community where we were, literally, welcomed with open arms.

As we take the plunge into 2014, I’m reveling in this new, unexpected season of freedoms and confidently expecting the breakthroughs to continue. I remember when it was unthinkable to take a lover home for the holidays. Now, far more often, it’s unthinkable not to.

We’re not all home, or out, yet, but this year Brazil, next year, who knows. Uganda? Russia? India? Texas? I hope so. During our festivals of light, I don’t want to see one more light go out, one more lonely queer’s life go dark when it takes all of us, and all our ways of loving, to brighten the winter days.