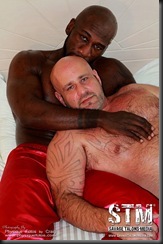 RE: Please introduce yourselves and tell us a little bit about the history of Savage Talons Media.

Pito: Well Rick and I conceived the idea of Savage Talons Media in 2009, but the name wasn’t attained until 2010. We were getting offers from different companies to do a porn but some companies were wanting me and not Rick or vice versa and we’re not those kind of men, neither one of us gets left behind we move forward together as a couple or we dont do it plain and simple..so we said lets start our own thing where we don’t have to worry about no ones say so, this is ours and we call the shots and run the show….so we were sitting around the house one day thinking ,why don’t we start our own company, at 1st we laughed about the idea…. So we started taking some pictures and I started a Facebook account and posting various shots that we took and people just grew attached to them and were commenting and liking and said you should be a model or something…I’m thinking wow these guys think i have what it takes to be a model? hmmmmmm…..we started out with a blog that Rick built to build a liking and fan base, while at the same time he was constructing and building a website for us and slowly started grabbing the the attention of men from all  over the world to take a look at us and see the kind of men we were and what we had to offer to the “world of porn”.

Rick: to reiterate a bit and add on to what Pito said, when we started the blog, it was really meant to only be an outlet where we could post the pictures that we wanted with out the restrictions that so many other sites were putting on us at the time. In time our audience grew and we were getting slammed with request to shoot a video with several other company’s and we didn’t really like the idea of filming with another company so we decided to start our own production company.

RE:  Pito, I know the music in STM’s DVDs is your original music.   How is the music career going?  Any new music on the horizon?

PS:  The music thing is something that I just do because I just have that love and passion for music.  As far as a career from it, not sure about that one, but would love for people all over the world to experience and recognize the talent that I do have.  I have 2 CD’s, under my belt “Fornicated Coma” and “Perverted Blackout” which are 2 awesome and unique produced albums and a new single called Seizures which is a ultimate party track….. as long as I’m living there will always be music on the horizon and it may not be everyone’s

RE: You have won a total of five Raven’s Eden Awards over the past two years.   You seem to have a very loyal fan base.   What do you think sets your movies apart from all of the other gay adult entertainment out there?

Pito: The fans are extremely loyal and we thank them all the time for showing us so much love and support..

Subscribe to Diversity Rules Magazine TODAY! Print subscriptions are available for $14.95 per year or digitally for $4.95 per year. Get BOTH for a discounted price of $16.95. To subscribe go to: