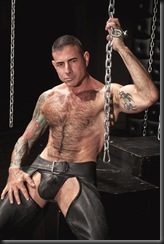 The following is Part II of Raven’s interview with Nick Moretti.  Part I appeared in the June issue.

This bill attempts to solve a non-problem. It is merely a PR tactic of the Aids Healthcare Foundation. The AHF wants everyone to believe that AB 332 is based on protocols for workplace health & safety, in fact this legislation threatens to destroy adult film industry self-regulation and a rigorous STD testing program that has proved effective at protecting the health and safety of performers since it was instituted in 1998. AHF has used significant funding (more than $5 million by some estimates) and misleading information to sway legislators and the public.

It’s a fact that the adult film industry is a legal and responsible industry. The STD testing program (APHSS.org) was developed to effectively manage risk and has been successful at nearly eliminating “outbreaks” of STDs. There has not been an on-set incidence of HIV infection since 2004! Both producers and performers are voluntarily compliant with the industry-appropriate standards that are currently observed. The bottom line is that AHF’s efforts will only diminish performer safety, drive jobs out of LA and California and spend valuable tax dollars on a non-issue.

Fortunately, AB-332 did not pass the third and final round of hearings before members of the House Appropriations Committee. They decided that passing the bill would involve enormous costs to taxpayers, not only administrative costs, but also in a significant loss of jobs and revenue for counties in California as adult producers are pushed to other areas for production locations. Representatives from AIDS Healthcare Foundation (AHF) and other AB 332 supporters did not even bother to show up to this hearing. What is probably the most disturbing to me on a personal level about all this is that the authors of AB 332 shut the industry out of the process. A set of regulations must have industry input to be viable. I can probably speak for just about everyone in the porn industry when I say that we would totally welcome well thought out guidelines and standards.

As for the second part of the question… Discrimination is discrimination. Period. Of course there is a place for HIV+ performers in porn. Legally, the Americans with Disabilities Act and the California Fair Employment and Housing Act prohibit discrimination in employment on the basis of disability (HIV is included in the lists of disability). What we need to focus on is how to avoid transmission of the virus. Everyone needs to know their status and that of all the other models on a shoot. Matching positive performers with positive performers is a no-brainer. Safe sex precautions should be used when matching up serodiscordant partners (just like in real life). PrEP (Pre-Exposure Prophylaxis), a fairly new HIV prevention method in which people who do not have HIV take a daily pill to reduce their risk of becoming infected, adds another level of options for keeping models from contracting HIV during shoots. When used consistently, PrEP has been shown to be effective in men who have sex with men (MSM) and heterosexually-active men and women.