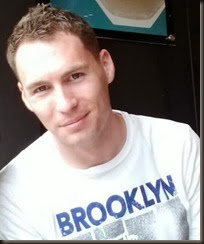 Jonathan Thompson is an HIV/AIDS Advocate currently living in Portland, Oregon. A native of Oneonta, New York, Jonathan graduated with his B.S. in English from the State University of New York College at Oneonta and has since worked and volunteered in the nonprofit sector in Portland, South Korea, and Vietnam.

Earlier this year I began a fundraising campaign that would allow me to spend one month in Hanoi, Vietnam as a volunteer HIV/AIDS educator. In June, I concluded my time as an ESL teacher in South Korea and made the move to Southeast Asia where the HIV epidemic continues to have a devastating impact. During four weeks in the country’s capital city I focused on three projects: teaching ESL and HIV/AIDS related terminology to medical professionals at a government designated HIV/AIDS hospital; writing a grant proposal to help prevent cervical cancer among Vietnamese migrant women workers; and designed and hosting a comprehensive seminar addressing the issue of HIV/AIDS for local university students.

During my weekly routine I woke up in a house shared with 15 other volunteers from all around the globe, all working on different projects in and around Hanoi.  Twice a week I took the bus for an hour heading outside of the city to teach at 09 Hanoi Hospital, a facility dedicated solely to the care of those infected with HIV or AIDS. For two hours I worked with a group of six doctors, nurses, and an administrative assistant, to help them understand English health terminology and its mechanics more fully. Our lessons implemented role playing, word games, songs, and group discussion. These students were exceptionally eager to learn and made great progress in their abilities during the course.

After three weeks of planning, the HIV/AIDS workshop was hosted on June 25 with 20 university students and 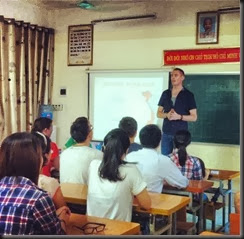 10 volunteers in attendance. We kicked off with true or false and multiple choice questions about HIV/AIDS to get everyone active and thinking. My goal was to make the topic personally relevant and accessible for each participant through activities, videos, and discussions. Students learned about current global infection rates and how HIV looks in their own country. Furthermore, we discussed the idea that HIV is not just a virus; it is a social disease that affects everyone.

The second half of the event engaged the audience through Forum Theatre. Our audience was introduced to Jack and Alice, a couple struggling to make good decisions and avoid becoming HIV positive in the face of at-risk activities, peer pressure, fear, and temptation. At the climactic point of each scene the play stopped and the audience discussed how they would reach a solution to the issues brought up (namely injection drugs, using condom, fighting stigma, and promiscuity). Audience members were selected to become part of the play as they replaced the oppressed character and interacted with the rest of the cast in an impromptu fashion to solve the issue. Students that came up to the stage experienced a hint of the feelings and frustrations of those that face AIDS related stigma.

The student response to the event was excellent with surveys illustrating that 100% of the respondents learned at least one new skill or piece of information that will be useful in life. Furthermore, 100% of those surveyed reported that they intend to use new information and skills learned outside of the workshop. After the workshop one student stated, “I’m planning to have a small talk with my friends at university and my brother at home about HIV.” Another student stated, “Now I know how to protect myself and what to do if I have HIV.”

The opportunity to do this work in Vietnam has forever changed me as a person, teacher, and an HIV/AIDS advocate. I experienced first-hand how eager the Vietnamese are to change the dynamic of this epidemic in their country. The youth I encountered were strong in their desire to affect change and dispel the misnomers and antiquated thinking that allow HIV/AIDS to persist in their culture. I am indebted to the donors that supported my campaign, the staff at UBELONG, and the many Vietnamese that allowed me to help them work towards a day without AIDS.