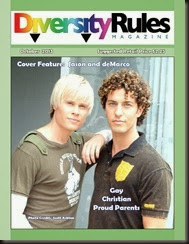 The October issue of Diversity Rules Magazine has been released featuring Jason & deMarco.  In addition to Jason & deMarco’s interview, the following is a partial listing of what’s coming up as well in October:

Keep Up Now: Terry Ludwig talks about who we are.

On the Road With Jonathan:  Jonathan reflects on HIV/AIDS education in Vietnam.

Autumn in NY: Robert Saladarini’s next travel article focuses on the autumnal wonders of the Hudson Valley, NY.

Movie Review:  A review of “Shabbat Dinner” – a film by Michael Morgenstern.

As you can see from the sampling above, the October issue is packed full of great information but you won’t be able to read it unless you subscribe, as Diversity Rules is now a subscription only publication. Don’t miss a single issue!  Subscribe now at:

Diversity Rules can now be downloaded on your I-PAD device!  Get the APP in the I-tunes store!

The October issue is brought to you by these fine sponsors!  Please let them know you found out about them from Diversity Rules Magazine: