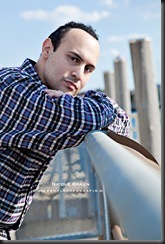 “No Holding Back” is the followup to Lovari’s award winning “The Statement” (which received 3 stars by NY.Times’ About.Com and includes  Top 20 U.S. Dance single “Turn Around”).

Lovari says of his new album, “It is completely autobiographical, and the production is an homage to the hip hop/R&B sound of the 1990s. Writing about my experiences has greatly helped me get through personal tough times. I’m singing about issues that alot of people would prefer to keep ‘swept under the rug’, such as my past dealings with ‘downlow’ (and sometimes married) men, my past alcohol addiction, current sobriety, and my personal faith.”

Lovari was featured on the front cover of the June 2012 issue of “Get Out Magazine” and preceded his album release with performances at this year’s Jacob Javits Center GLBT Expo NYC and Queens, NY Pride. The album’s preview single/video “Foolish Beat” was infamously featured on PerezHilton.com and the lead single “Keep It Movin’” (feat. Loco Ninja) reached Amazon.Com’s Top 40 R&B Singles chart. The current single “Right Here,” went for FM and internet radio market adds on July 3rd, and was reviewed as being “reminiscent of early 90s club classics ala C&C Music Factory, Black Box, and La Bouche.” (P. Dade – from a U.S. Review). The album includes a duet from Friday The 13th TV series actor / “One Night In Bangkok” singer ROBEY on “Take It To The Top.”

“No Holding Back” hit international retail outlets on July 10th and is available in the U.S. 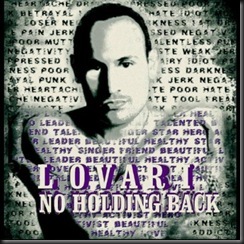 The entire album may be streamed for free listening at:  http://www.audiomack.com/album/lovari/no-holding-back.  (Album cover photo by:  Alina Oswald)