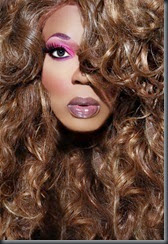 BeBe Zahara Benet—the very first winner of RuPaul’s Drag Race —  bares all in her new show that premiered at Manhattan’s The Triad Theatre on July 21st with a subsequent performance on July 24th.  Following her recent critically acclaimed off-Broadway show “Creature,” Reveal will showcase a more intimate, vulnerable side to the Cameroon-born drag entertainer.  Through song and never-before-told stories, the live show will explore the BeBe beneath the colorful wigs and make-up by delving into her fantasies as a child, her relationships with men today, the community and family she has built since being named America’s Next Drag SuperStar and how spirituality has helped BeBe Zahara Benet navigate the fame and remain true to her self.

BeBe says of her show “Fans should prepare for loads of surprises.  I will reveal new music, new looks, new stories, and the greatest enigma of them all: me.”

JRK:  Tell us about yourself, your background and how you got started drag entertainment.

BB:  I was born and raised in Cameroon, specifically in west Africa.  From a very tender age I was very interested in music, fashion, dance, makeup, hair, etc. and as i grew older i knew i was born to be a performer. I had the opportunity to visit a show lounge when I moved to Minnesota, it was there that I put all the puzzles together — I discovered drag was what it was called because it embraces everything.

JRK:  You were the first winner of RuPaul’s Drag Race.  That must have been very exciting!  What was it like to be named the winner?

BB:  OMG, that feels like a very loooooooooooong time ago.  LOL.  Being named the winner was validation to me about I do.  It created the urge to better and challenge myself, to build a strong and recognizable brand and I appreciate all the platforms I have been given.

JRK:  What was the process to get on the show?  How many other contestants did you have to compete with to be considered?

BB:  Well during the first year, producers were sent out to different states to cast entertainers as well as there was an on line voting contest were you could submit your stuff for consideration. As for me I had the opportunity  meeting the casting crew and submiting to them my press kit.

JRK:  How has your life changed since being named the winner of the Drag Race?

BB:  I have had the opportunity to do alot of travelling, both international and national, meet and share experiences with so many people from different walks of life, be able to really focus on my brand and start my music journey — one woman shows . I am also fortunate enough to be hired as a motivational speaker for different colleges were I talk about celebrating diversity and sharing my own journey, etc. I cannot complain.

JRK:  Your show “Reveal” debuted in The Triad Theater on July 21st with a subsequent show on the 24th.  The press release about the show stated the show would “explore the Bebe beneath the colorful wigs and make up…”  Who is that person and what does that “more intimate, vulnerable side” of Bebe entail?

BB:  I had done a show prior to “Reveal” called “Creature” and it was more of an extravagant, over the top, Las Vegas off Broadway production. This time around with “Reveal” I wanted my guests to have a more up close and personal inside look at the the alter ego and the mind behind that. I wanted to celebrate my music and my thoughts.  The person beneath it all is one who also goes through the same challenges as everyone else, one who tries to be centered even with all the chaos around, one who loves, wants to love and shares love, one who seeks to inspire and be inspired,at the end with or without the ulter ego, we are the same # human.

JRK:  What are some of the “fantasies” you had as a child?

BB:  Fantasies? aweeeeee LOL.  LOL.  To be the biggest star in the world… LOL.

JRK:  Spirituality has played an important role in your life in that it has allowed you to “navigate the fame” and remain true to yourself.  Can you explain how it has helped you deal with the fame and yet stay true to the person inside?

BB:  Well my culture and upbringing has alot to do with it as well. I make the conscious effort to always stay humble and thankful for what I have. I have conversations with myself which sounds crazy but it gives you perspective on a lot of your concerns. Above all I find those things that keep me centered and balanced. In spite of how trying this life can be, I always go to bed content because I am living my purpose.

JRK:  What do you have planned for the future?  Will you be doing more of the off Broadway show?

BB:  I will love to be back on television, I am putting finishing touches on my upcoming album to be released soon, as well as touring with my show “Reveal.”

JRK:  Do you have any parting thoughts for Diversity Rules readers?

BB:  Of course darling … LOL… I am grateful for all the love and support and to all my Diversity Rules readers, there is nothing as rewarding like finding and living your purpose to the fullest. Find yours and live it out loud. Kisses and feathers.