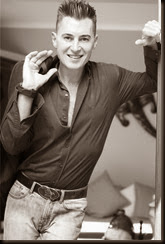 Pierre de Villiers is a household name in South Africa due to his internationally recognised reality self-help book ‘Dear Pierre’ which sold out within 8 weeks in South Africa as well as being a TV continuity presenter for the country’s national broadcaster SABC 2 in years gone by. When anchoring TV shows like the SABC Big Brand TV Show as well as being a soap star in Egoli Place of Gold he also reads the Business Day finance news on Jacaranda FM and is chosen to do the live new year’s eve TV presenting welcoming in the new millennium. Apart from being a television and media personality Pierre also gives back to the community by lecturing communication studies at the University of Johannesburg (UJ) after resigning as youngest editor of the SA Military Medical Journal with the military rank of Captain. While lecturing at the University of Johannesburg he does his training as therapist and sets up shop in private practice which causes considerable media interest.

Pierre finds himself showcased live on Radio 702, featured on SABC 3 Free Spirit and twice invited to the set of SABC 3 Talk and eTV’s Twenty Something. After the Star newspaper’s Verve Lifestyle profiles him the Sunday Times follows with a complete centre page spread on this TV personality turned therapist who is destined to become an internationally recognised author. While maintaining his TV presence for over a decade by randomly presenting shows like the SABC’s Matrics Uploaded it is time to write the reality self-help book ‘Dear Pierre’ which sells out at the end of 2013 and causes a ‘Dear Pierre’ media phenomena both locally and abroad.

Endless media interviews follow and Pierre is immediately cast as “Screen star turns author” by the South African CAXTON Press with the Saturday Star doing a an in-depth profile and top ranking radio stations such as Jacaranda FM inviting him live on-air. An even bigger wave of media interest follows when FORBES Magazine Africa asks Pierre to anchor a TV talk show based on ‘Dear Pierre’ on sister company CNBC Africa which he turns down due to a pressing schedule. He finds himself live on-air talking to BBC comedian Ruby Wax who wrote the much acclaimed BBC series Absolutely Fabulous and founder of the Crawford Schools empire Greame Crawford flies out from Sydney to Johannesburg to meet Pierre in person for a signed copy of ‘Dear Pierre’ before world known Ryan Seacrest’s mentor US TV personality Tom Sullivan writes a personal email to Pierre exclaiming: “BRAVO!” after reading ‘Dear Pierre.’