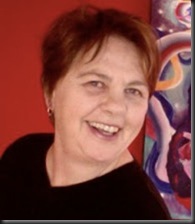 During the 70’s a band of radical lesbians traveled the countryside looking for lesbian paradise.  Lamar Van Dyke was one of the Van Dykes driving from coast to coast, from Canada to Mexico. It was a caravan of bald vegan women traveling from women’s land to women’s land. They were smashing monogamy, attacking the patriarchy at every possible opportunity and generally wreaking havoc wherever they went. They refused to speak to men unless they were mechanics or waiters  Her van broke down in Seattle in 1980 and that’s where she settled in.

She opened a business that flourished and kept her in touch with the pulse of the gay community, but most importantly, she found “her people”. She found a passel of women who liked to live dangerously, who liked to ride that edge between realities and who spoke their own truth. They bonded, they encouraged each other to be as wild as they could be and they raised the bar on fun.

Lamar Van Dyke has authored, STUCK, a book about conjoined twins, Marlena and Adrian.  They have been at odds with each other since birth, fighting over which way to go, what toys to play with and what to wear. Newly ensconced in their first apartment, they are determined to learn about sex, something their mother neglected to mention.  When Joy walks through the door to order a cake for her parents anniversary party, Adrian is smitten. The feeling is mutual and the sisters have to figure out how to accommodate each other as they clumsily navigate their way through this uncharted territory. Marlena is adamant about her heterosexuality and is succumbing to the advances of Tony, an internet porn mogul who is deliberately misrepresenting himself as a car mechanic in the hopes of filming them for his website, “Freakathon.”