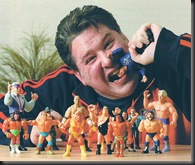 With a curtain rod as a standing microphone, Dale Gagne took his first steps into show business at the young age of 3. Although he had a supportive audience of friends and family, “The Voice’s” Adam Levine wasn’t around to reiterate he couldn’t carry a tune. Fast forward to 1983, still in high school and his first “official” introduction to show business. Little did he know at the time that show business would require him to dress as a 7 foot rat from New Jersey and peddle pizzas. Yep, being Chuck E. Cheese would later lead him into the world of Professional Wrestling, not a stretch of the imagination that a rat is a rat. Always intrigued with the showmanship of Professional Wrestlers and a fan of Las Vegas style productions, Gagne was on a crash course to a life long career.

Promoting his first Professional Wrestling event came by default. With an academic background in marketing and sales, Gagne was the first to develop a Teen Nightclub concept in Minneapolis, after being the youngest General Manager in Chuck E. Cheese history. This success led to numerous job opportunities including a marketing and sales project for the Metropolitan Sports Center, then a major entertainment complex. Gagne was called to assist with a live UWF Professional Wrestling event for the legendary “Cowboy” Bill Watts and independent “trainer of the Superstars” Eddie Sharkey.

After a successful debut event in Minneapolis, Gagne and Sharkey became fast friends with Sharkey training and educating Dale on the inter workings of the Professional Wrestling business. Gagne’s first national break came in the form of Billy Jack Hayne’s, a former WWF headline Superstar, Oregon Wrestling Federation. After a year of learning the ropes by working a nightly territorial system, Gagne returned to Minnesota and started working for the original American Wrestling Association (AWA) alongside such notables as Verne Gagne and WCW Vice-President Eric Bischoff.

In 1991, at the demise of the original AWA, Gagne was contracted by Mission Creek Theme Park as it’s interim General Manager. This position gave Gagne the flexibility to also work in the music industry with such notables as New Kids on the Block, Garth Brooks, Alan Jackson, Charlie Daniels and Johnny Cash among others. Gagne was also responsible for creating and directing an award winning, live performance by the costumed characters “The Simpsons” ™, another first of it’s kind.

With Professional Wrestling at an all time high due to the success of the WWE, Gagne leaped back into the business by purchasing the bankrupted rights of the original American Wrestling Association, AWA, along with longtime business partner Jon Stewart. Together with Stewart, Gagne developed two brands under the AWA banner, WRESTLING SUPERSTARS – LIVE! and AWA SUPERSTARS OF WRESTLING, allowing the company to play numerous domestic markets and to take advantage of the strong international demand for Professional Wrestling.

Success often comes at a price. With his personal “demons” chasing him for almost a decade, Gagne made a life-saving decision. He checked into rehab. During treatment, Gagne had yet another personal revelation. At age 42, he came-out. Diving in head-first and being true to himself, Gagne has recently started to provide diversity leaders with presentations to engage and share his story with employees and teams of all sizes. Don’t worry about him straying too far from the wrestling business he’s mastered. According to Gagne, “things just got a lot sexier in the ring.”