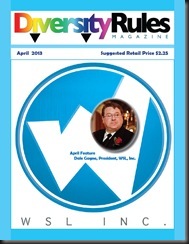 Even though spring is arriving late in the Northeast, the April issue of Diversity Rules Magazine is right on schedule!  You don’t want to miss the upcoming issue featuring Dale Gagne, the President of Wrestling Superstars Live (WSL), Inc.  In addition to Dale’s interview, the following is a partial listing of what’s coming up as well in April:

Keep Up Now:  Terry Ludwig talks about being the “Co-Creator of the Universe.”

On The Road With Jonathan:  Jonathan Thompson discusses his efforts to increase HIV/AIDS awareness in Southeast Asia.

Gay and Locked Down:  Antonio Barrone discusses what it’s like to be an incarcerated gay person.

Queer Toons:  A new set of “toons” by Mickey Ray.

The Amazon Trail:  Lee Lynch’s next installment entitled, “At Home With Eagles.”

inQUEERies:  This is Milton Wendland’s last inQUEERies column, as he will be leaving his job in Kansas and relocating and won’t be able to focus on writing the column.  But never fear we have a replacement coming in May.

Cash in Your Miles!  Head to Ft. Lauderdale, FL:  Robert Saladarini’s next travel article focuses on the lovely queer spot of Ft. Lauderdale!

Special Nobody:  A new book by Brenden Spratt is featured about a young gay man who has broken down at the crossroads of life, the teenager he once was, and the man he aspires to be.

As you can see the April issue is packed full of great information but you won’t be able to read it unless you subscribe, as Diversity Rules is now a subscription only publication.  Subscribe now at www.diversityrulesmagazine.com/subscribe.html.  Don’t miss a single issue.