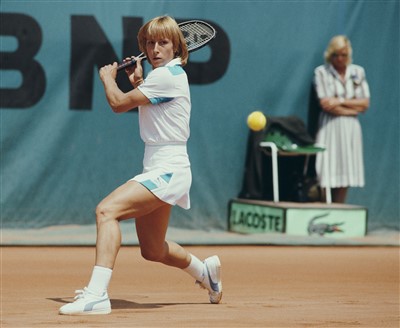 Martina Navratilova was one of the Queens of Tennis. She and her rival, Chris Evert Lloyd, dominated women’s tennis in the early 1980s. Martina, however, was Tennis Magazine’s GREATEST FEMALE TENNIS PLAYER from 1975 through 2005 (that’s 30 years). Nobody else has ever been honored such a feat. Her status as one of the greatest tennis players has marked her as a role model for the LGBT Community.

Growing up in Czechoslovakia, Martina started young — very young — playing tennis. She was influenced by her grandmother, Agnes Semanska. She was a tennis player for the Czechoslovak Federation, ranked #2 among Czech women during her career (which ended with World War II). Her mother was a tennis player and gymnast who encouraged her daughter’s interest in the sport. She started hitting balls off a wall at 4, eventually starting to play the sport at age 7. Her stepfather became her first tennis coach, and the start of a successful tennis career was set for Martina Navratilova.

In 1972, at the young age of 15, Martina won the Czechoslovakia National Tennis Championship. A year later, at 16, she entered the United States Lawn Association professional tour and won her first professional singles title in Orlando in 1974 (age 17). Later that year, she was runner-up for the Australian Open and the French Open (won by Chris Evert). Overcoming the defeat, she and Chris Evert teamed up to win the French Open Woman’s Doubles title, winning again in 1976 against Billie Jean King and Bette Stove.

The stage was set for the unofficial ‘Chris Evert vs Martina Navratilova’ rivalry. In 1978, Martina defeated Chris at Wimbledon 1978. The win made Martina the World’s #1 ranked woman in tennis, relinquishing the title from Chris. Martina held the title until January 1979, when Chris took back the title. The following year after her first win, Martina beat Chris again in Wimbledon, and the World #1 ranking was returned to Martina. But before Wimbledon, they played their most exciting match in the Eastbourne final, where Chris edged out Martina for the win. In 1981, Chris defeated Martina in the finals of the Women’s Tennis Association championships, but Martina avenged that defeat by beating Chris at the same event in 1984. Also in 1981, Martina beat Chris in the finals of the Australia Open and the U.S. Open. Martina went on the win both Wimbledon and the French Open in 1982.

By the time Martina retired from the sport, Martina had won 167 top-level singles titles and 177 doubles titles. She is the only player to have won at least one tour event for 21 consecutive years and won the singles and doubles at the same even a record 84 times. Shew was ranked in the world’s top 3 in singles for 15 years between 1977 and 1993. Her career singles match win total of 1,442 is the most.

In 1981, after becoming a U.S. citizen, Martina gave in an interview in the New York Daily News where she stated she was bisexual and revealed her relationship with author Rita Mae Brown. She quickly regretted the interview and asked for it not to be printed; but the interview was printed, and Martina became a role model, not only for women in tennis but to the LGBT Community. Now recognized as a lesbian, she married her long-time girlfriend, former model Julia Lemigova. (She proposed to Julia on the big screen at the U.S. Open in 2014.) She also has become a public figure for LGBT rights, becoming the recipient of the National Equality Award from the HRC (Human Rights Campaign).

Martina Navratilova has and will always be a positive role model across the globe.